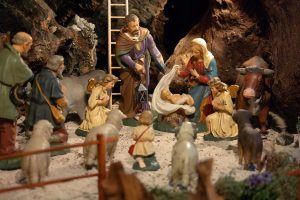 (originally written at the beginning of Advent in 1998, updated  in November 2017)

Although I'm agnostic, every Christmas season as our children were growing up I looked forward to the day when we’d bring out the creche. In this simple little nativity scene, barely larger than a breadbox, I discovered metaphors that helped me explain some of the convictions that guide my life and give it meaning.

Look at the inhabitants of the Creche...

A young couple about to become parents and some barn animals in the background. A holy scene, according to tradition, but also a very carnal one. Mary and Joseph aren’t thinking great thoughts, composing music, or discussing scripture; they aren’t doing any of the things superficially associated with spirituality.

Instead, they’re doing very physical things - seeking warmth and shelter, experiencing hunger and exhaustion, giving birth, loving, nursing, dreaming, wanting, feeling pain and joy. If there exists a spirit that abides in us and guides us, it does so through every molecule of this body we inhabit. I'm not trying to degrade spirituality by reducing it to instincts (though frankly I see nothing wrong with that - instincts have been responsible for keeping all creatures alive since the dawn of creation), but to elevate our understanding of matter by raising it to encompass spirit.

Earth and matter don't distract us from spirit, they incarnate it. They’re the material out of which spirit is sculpted, made visible, and through which it acts.

Next, look at the shelter provided by the Creche...

A barn, a stable, inelegant and unadorned. Over the years, tufts of straw have fallen from the roof of our little creche, a process no doubt aided by the attention of the generations of cats who have lived with us. The structure is shaggy and splintered, but it stands solid, having endured small children, pets, and a cross-country move.

Like the original after which it is modeled, our creche is spartan and utilitarian. With just a few alterations, it could almost represent my dream house! No chrome to polish, no furniture that requires waxing, no knick-knacks to dust, nothing easily broken.

The word "austere" comes to mind, but not the dictionary definition of "having a severe or stern look, forbidding" -  which reminds me of the dour films of Ingmar Bergman that I believed to be so profound when I watched them in my college days.

Now I prefer a definition provided by Thomas Aquinas and paraphrased in the book Tools for Conviviality by Ivan Illich: “a virtue which does not exclude all enjoyments, but only those which are distracting from or destructive of personal relatedness."

Austerity, then, promotes relatedness by minimizing distractions.  That’s the lifestyle I seek!  One that is simple, utilitarian, and austere, with fewer unnecessary chores and fewer frivolous distractions. One in which we're left free, instead, to witness and share the superfluous grace that abounds all around us in every square foot of fertile soil, in acts of generosity, in moments of personal inspired creativity.

We're blinded by "too-muchness" in life. The creche suggests an antidote.

Many years ago, we copied a tradition described in a magazine article written by an author whose name I’ve unfortunately lost - “unfortunate” because I’d like to give her credit for this lovely idea.

On the first Sunday of Advent, all of the characters of the creche - Mary, Joseph, baby Jesus, three Wise Men, and two shepherds - are placed in distant corners of the house while the creche with its animals is set in the living room.

Each evening we’d move the figurines a little closer to the creche, representing the travel of these ancient figures, until on Christmas Eve, Mary and Joseph arrive at the barn.

After our oldest daughter went away to college, we sent one of the major figures, Mary or Joseph, to her so that she could carry it with her when she returned home for the holiday, just as she used to move it nightly from her room to our living room.

We would do this for our younger daughter, too, when it was time for her to leave the parental nest.

I love this idea! It points to relatedness, to a move toward a center represented by both the creche and our home.

It is a mandala image, a picture of a repeated return to a protective, encompassing circle, wherever that circle may be located, of whatever materials it may be constructed.

This yearly return to our creche is, for me, a return to my own center, to the things I value most: a home that directs me towards austerity, grace, and a merger of the material and the spiritual, body and spirit. A return to the heart of my family, to our memories, to our love for each other. The creche is a metaphor for the very best that life offers me.

Georgene is a retired editor and substitute teacher.