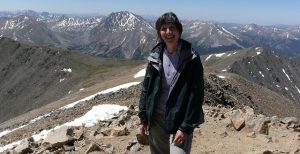 The clackety-clack of the train that morning will be forever fixed in my memory. I was hung over from the night before, which had become a rather frequent occurrence. Also, I had sent off a few drunk texts to my ex-husband and his girlfriend, which had created a storm of nasty responses from them.

Sick, ashamed, and so sad at where my life was. I could hardly believe I found myself at 50, hating my life and myself and drunk texting my ex. Watching the slow-moving train that chilly winter morning I thought there was only one way to end all the pain and sorrow inside me. I was the first in a line of cars caught at the train tracks. All I had to do was hit the gas and plow my car into the train. I could even write a quick note, so that bastard of an ex would know he was to blame for my demise.

I tell people my transformation the year I turned 50 began that day at the train. However, it's far from the beginning of my story. Years of hearing I was not good enough, or that what I thought and felt and said was stupid. Years of feeling I had to follow the agenda of others, that their paths were to be mine.  I felt so unloved and discarded. The trauma and abuse of my life had left me broke, drunk, overweight, and contemplating ending my life.

I chose a different path that morning.

I decided to head to Colorado. I gave my six weeks notice at work, sold most of my stuff, packed my car with only what I needed, and with a $1,000 to my name headed to Colorado. What I would do out there I had no clue. I knew I had to do something and running away from home seemed like the best option at that time.

I lived in the basement of a good friend, and took a job as a barista at a local coffee shop.

The beauty and the stillness of Colorado gave me the strength to stop drinking, start figuring out who I was, and forge my own path.  I started running trails, and hiking mountains. The noise of the drama back home was lost in the beauty and strength of my surroundings and soon became non-existent. The healthier I was the stronger my resolve became to create a life I loved.

For many weeks though, I still felt shame about my life, and I had a challenging time forgiving myself.  I didn't love me at all. I began a routine of journal writing every morning, cleaning up my diet, and finding ways to become more confident in myself.

I had been to Colorado many times. A few years before I had hiked Mt. Elbert, the highest mountain in Colorado, at 14,444 feet.  A touch challenge - it was a nine-mile round trip straight up and back down, taking a total of 8 hours of hiking.  I decided to get to the summit of Elbert again.  It became a goal. A hard one at that, considering how overweight and out of shape I had become.  My confidence was non-existent as well.

Just after being in Colorado for three months, I started with an "easier" climb, Mt. Bierstadt, at just above 14,000 feet. This hike I did "solo" There were other hikers on the trail, but I was the only one in my party. What a total confidence rush when I reached that summit, on my one. Then I knew I could conquer any challenge that came my way.

Elbert was hiked and conquered that same month.  On the summit, way above the world, so quiet and awe inspiring, I knew I had arrived at the life and love of self I deserved.

Transformations are never easy, I have had a couple of rough patches since then. Yet, I have retained that confidence and love for me. I have the capability to forge my own path, and what others think of me is none of my business. Because I know who I am.  I define my own worth. I love myself too much now to let anything or anybody wreck this love affair.

I am grateful every day for this beautiful life I have created.

Shelly has created a life of love, happiness, and gratitude. Her favorite things to do are writing, drinking coffee, and creating ideas for new projects. Shelly is currently the Director of Development for a small nonprofit, and holds a degree in Social Work.