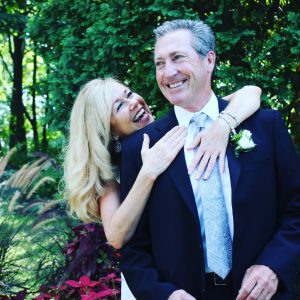 I have been one known to “push the river,” learning early on how to survive. That way of being has stayed with me all these many years- until now.
I am learning how to be nurtured by my new husband- I call him- goodandhandsome. Sometimes I wonder how I have been so lucky to have him in my life, but then again, I have made my luck.
How?
By simply putting one foot in front of the other.
My second marriage is the polar opposite of my first. The first time around I married a man I loved. The second time around I have now married a man I love and who is right for me. Big difference!
He is right in all the ways my battered heart and spirit need.
I won the husband lottery.
David is a salt-of-the earth, cream of the crop kind of guy- and I deserve him- and he deserves me.
Win-win!
When I started dating after my marriage ended, I devised a list of desirable traits in a potential partner that were non-negotiable.
The first, and most important was kindness.
I had finally arrived at a place within myself where I felt worthy of that kind of behavior.  Anything less was a deal-breaker.
But still, I had no idea if this man was out there for me.
I had read accounts of women who were sure they would find “their guy or gal,” their true love.
But, on blind faith, (and with I might add- a stellar feng shui corner, topped off by a picture of Michelangelo’s David) I stepped into the dating world via Match.com.
To say this was a stretch for me I cannot overstate!  I mean, my girlfriend posse had deemed me the least likely of anyone they knew to go on Match.
But, I did.
I took the leap not knowing the outcome, but I had a deep desire to see if “my forever guy” was out there.
Now, this is where it gets really interesting.
I come from a family of deeply intuitive women, starting with my Irish grandmother and her sisters. This trait has been passed down to me and my some of my siblings.
So naturally, I enlisted the help of my sister Maureen to see if we get a bead on my possible “forever guy.”
As she sat in contemplation, (I was too close and wishful to do this by myself)  she piped up- “I’ve got him!”
“Really?!” I whispered.
“Oh my God, where is he?” I exclaimed.
“ He’s north of here.” (he was) “ He lives near the water.” (he did)  she said.
“Can you get a name? I asked.
“Yes, his name is David. “ she announced with a smile.
“This is him Rosie, he’s real.” she called out.
I cannot begin to convey the level of hope that was ignited within me.  At the time, I was going through a harrowing ordeal.  Everything was going wrong and even my body was protesting.
I sat there with my frozen shoulder and jacked up back, and let this knowledge wash over me.
Unbelievable, and as it turns out true!
I met David at a Match.com mixer.
We dated for two years and then decided to move in together.
And, slowly the nurturing began.
I say slowly because I was holding my breath, wondering if he was going to surprise me in an unpleasant way. He did not.  Over and over again, he did not.
And I as I trusted him-I began to receive his nurturing.
This nurturing led to our marriage a year ago, September 9th, 2016.
Five years ago, I never thought marriage would be in the cards for me, but Destiny had other plans for me, us.
Marriage and all our accumulated wisdom has turned life into something that feels restorative and an antidote of sorts, from all that had come to pass.
Goodandhandsome- thank you my forever guy.
Discover more about Rosie here:
Website: www.coachrosiedalton.com
Facebook: https://facebook.com/roseydalton/
Instagram: @themidlifeaesthetic

Rosie Dalton is a women’s midlife coach, artist, blogger, and retreat facilitator.
She is passionate about enriching women’s lives through midlife mastery, debunking cultural mores around aging, and initiating women into their personal feminine-rocket fuel!