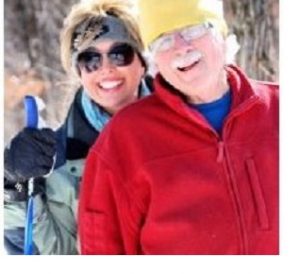 Gail first met her soulmate when she was applying for work in his office, but he was already married so that was the end of it. Then years later and many weeks after his marriage ended, he asked her out in the most old-fashioned of ways. True love will keep until its time.

Read the rest of her story HERE.

Gail is a blogger, artist, and art instructor at Aging Schmaging.