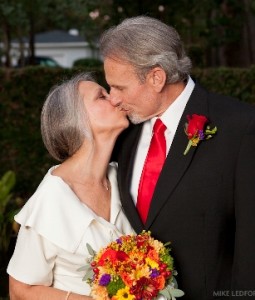 Reader Question: Where do I find my soulmate? I've been looking everywhere for a good man. Are there no good men left?

How many times have you heard those words come from the mouths of beautiful women, women you just know would make a wonderful life partner? Maybe you’ve said them yourself. We once did.

We also think it is important to be living a rich life full of things you love - with or without your soulmate. Back in my BS phase of life (That’s “Before Steve,” not what you thought. Or maybe it is...) I had a very simple philosophy: Do the things you love with people who also enjoy doing them. I firmly believed I would either find my soulmate or be having too much fun to notice that he hadn’t yet appeared.

That created a nice enough life, but still somehow missed the point.

As you may have noticed from our photos (check them out on my personal Facebook page), Steve loves his motorcycles, but the motorcycle lifestyle didn’t bring him into contact with women who were soulmate contenders. I had surrounded myself with single gal pals and was fully immersed in fun girl stuff. Neither of us was in a “target rich environment” for connecting with our Beloved, but that still wasn’t the real problem.

Then one day, unbeknownst to each other, we each looked into the mirror and realized the person we were looking for would never look at us. Not because there was anything "wrong" with us at all, but because the parts of ourselves we were nurturing and living were putting up barriers to connecting with the love we desired.  So again unbeknownst to each other, we each began a personal transformation into becoming the kind of person our soulmate would want to find. Our own best selves, as it turns out.

Steve got rid of the eight (!!!) piercings in his ear. He cut his gorgeous hair and donated it to Locks of Love. He made changes in the places he chose to hang out and the activities he chose to pursue, re-engaging with old favorites like hiking and kayaking. He began nurturing his artistic and creative interests. These were outer changes that were important to him and to his vision of who he was becoming. He also sought out and joined positive and spiritual groups including a metaphysical book club. He meditated. He brought things into his home that invited love. He focused on cleaning up his act, inside and out.

At about the same time, I embarked on a deep personal cleansing, moving to a place where I knew virtually no one. I began letting go of my all-consuming career and jettisoned some misguided friendships. I began re-engaging in old favorite activities like hiking and art, joining an art group in my new town. I began writing again. And most importantly, I sought to understand the icky parts of previous relationships, especially my own role.  After all, I was the common denominator in each of them.  Daily exploratory and questioning meditation became my new norm.

There’s an added giggle in all of this - prior to our unknowingly simultaneous purging phase, we had lived in the same town for many years and had never met!  Our paths never crossed. Yet when we finally did meet, it was because of mutual friends that neither of us had known before we decided to become the mate we would want our soul to find. Our truest selves without the inner distractions and barriers we had built up. These new friends entered our lives as part of our quests and ultimately put us on each other's radars.

Looking back, I would describe the steps this way:

After all, your soulmate isn’t someone “out there.”  He or she is already a part of you who just happens to be in a different place at the moment.

5 thoughts on “Anne Wade – If You Want to be Found, Stop Looking – Finding Your Soulmate Is an Inside Job”