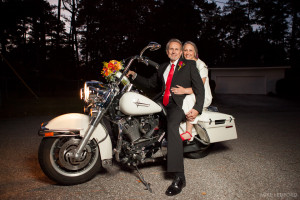 Steve and I met through mutual friends on Facebook.

For a number of years, we had lived in the same smallish Southern city, but had never met. That’s partly because Charleston is so cut up by rivers and bridges that the various parts of town almost seem like their own little villages. But the main reason is that we were living vastly different lifestyles back then.

When my daughters and I moved back to SC from Alaska, we made a bee-line for Charleston. It was a place we all loved. It had beaches. It had great culture and great food. And did I mention beaches? Life was a whirlwind of the girls’ activities, my career, the arts, fundraising for the symphony, new gal pals, travel – all things I thoroughly enjoyed.

Steve arrived in Charleston a few years later after retiring from the Marines, ready to indulge in some of his own favorite pastimes. At the top of that list was riding his Harley any time he wanted which led to new biker friends and biker bars.

Our paths did not cross.

After 10 years in Charleston, an opportunity arose for me in Minnesota. Shortly before moving, a young friend practically forced me to join this new thing called Facebook. She insisted it would be a good way to stay in touch and could be good for my businesses. So I took a look and wasn’t enthralled. Who cared what everyone was cooking for dinner? Plus, I was just too busy. My younger daughter was getting married and I had zero interest in adding anything to the plate, especially whatever this new social media thing was.

My younger and smarter friend was very persistent, though, and ultimately won.

Let’s back up for a moment, though. My years in Charleston and Minnesota were also a crucible or maybe a chrysalis. After divorcing in my forties, I had embarked on a path of turbo self-growth, radical self-discovery, and deep healing. It felt like whatever had led to my part of the ending of my first marriage was something affecting (infecting?) my entire life. I HAD to explore this from every angle. It wasn’t a question, but a deep-rooted need. It felt like the real ME was buried in there somewhere and begging to be unearthed.

The reality of that was a season of messiness. Of dating the “wrong” men, and digging deep into why I dated them and why they were wrong for me. Of asking hard questions about family relationships and pissing off a lot of people. Friends were made and lost. My business grew beyond my wildest dreams, then crashed. Cancer came calling.

And then, out of nowhere, there was a sense that the season was coming to a close and a new one was beginning.

It happened in the oddest of ways.

I had come to South Carolina for a visit and was heading to my parents’ for the weekend. That’s when my sister, brother, and I learned mom had been diagnosed with Alzheimer’s and the situation was bad. I immediately packed my suitcase, laptop, and cat and moved into my childhood bedroom to camp out until we could get things sorted.

A couple of weeks later, a very interesting man began popping up on friends’ Facebook posts. And then he friended me.

Turns out, he had been in his own crucible. Biker life had been fun, and it had run its course. His previous wife had passed away and he was yearning for a new love and deeper connection. He stepped away from biker life and began pursuing other interests – kayaking, metaphysics, music. And met new people who happened to be people I knew.

For our first date, we met for lunch. Ten hours and four waiter changes later, we knew we had found something special.

Over the next weeks, we marveled that shortly before meeting, we had each shifted into thinking about what the person we would want to share life with would be wanting in a partner. That’s subtly and radically different from thinking about what WE wanted in a partner. Then we looked within, found those matches within ourselves and began nurturing those parts of ourselves in new ways.

And that was the key. We allowed ourselves to become the mate our souls were looking to find, our own best selves.

That best self, the key to love, had been within all along, of course, just buried under Life and baggage. When we cleaned our “houses” and opened our eyes, it was right there in front of us.