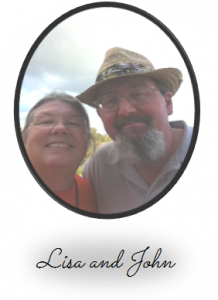 My fifth decade has not been good in the ways that I had expected.  But in this way it has been the best decade of my life yet:  This has been the decade in which I began to understand what it really is to love and to receive love. Call it Graduate Studies in the School of Life.  Call it Reform School. I have been getting an education.

A cocky student always, I thought I knew all about love when I met John thirty-some years ago as I was starting my 3rd senior year in college.    He was the new guy in our crowd with an unpronounceable last name.  He was quiet and aloof.  I was gabby and outgoing.  He was into running and I was into sitting.  By October we had started dating.  John and I were engaged in February.  We were married on graduation day in May.  My family thought I was nuts.  It was too soon, he was from up north, he was a sports fanatic…that name…They were right! I was CRAZY about John.  I could not resist him and did not try.

Once we were married and started on our little voyage of life together our incompatibilities became more apparent.   We were in fact polar opposites.  We could not agree on anything.   After our second anniversary we entered what I have referred to as our “Fifteen Year Bad Patch”.

We stuck it out.  Even when it didn’t make a lick of sense.  Like a “Pushme-Pullyou”, John and I resisted each other through money troubles, career changes, two desert war deployments, serious doubts and disagreements.  We could not agree on which direction to mow the grass, but we stuck together.  From no perspective did our relationship look like a love story.  More like a dogged determination to persist against all odds.  Things always settled back down.  I went my way and did my thing, and John went his way and did his thing.  At times I am sure we both dreamed of a day we could cut loose from the other one and start over.  But we didn’t.  And we never killed each other, but at times I thought we might.

I greeted age 50 more eagerly than I had any other.  I was making plans to travel,  maybe to take a year teaching overseas. The possibilities looked endless.  But it soon became clear that my folks needed help.  Among the four kids, I was the only one who could reasonably break away.  John and I hammered out a plan for me to go stay with Mom and her husband until their various issues could get sorted out.  We were both very okay with being apart most of the time.

As rocky as our married years had been up until then, neither of us could have foreseen the brutal storms that lay ahead as we made the decision for me to move in with my failing folks.

Now John was home alone struggling with his own health issues, continuing to try to work and maintain our house.  I was three hours away dealing with my stepfather’s dementia and his eventual death; my mother’s physical and mental dissolution and her absolute certainty that their poor financial decisions would somehow turn around.   It seemed like a good idea when Mom decided to move to a house in her old home town where she could be nearer to her extended family.  It wasn’t.  After weeks of packing and transporting we got her moved in with all her treasures.   The first day there she fell and became an angry invalid.   Natural disasters (hurricanes and floods) followed. My family’s beloved dog died.  As a family we experienced more misery than I want to list here.

But coping with disaster finally made a team of John and I.  We started sharing daily phone calls of encouragement.  We started saying “I love you” as we rang off.  We each experienced and then shared confidences of our growing faith in a greater power that was supporting us and guiding us through.   We missed each other.   We neither demanded nor expected more of each other than what we gave, but what we gave we gave freely.  He changed and I changed and I did not even think that was possible.

Surviving these storms has worked a magic between John and I that crazy, young love and “white lace and promises” never did.  We are still as different as two people could be.  But peace and compromise have replaced fussing and frustration.  I tell you sometimes I am amazed at the sweet, simple features of the life we have cobbled together by sticking it out and how grateful I am.

This was the main lesson:  we were destined to do this life together.  The rough parts have taught us what we most needed to learn so that we can move on to the next course, better prepared for what we must learn next.  Together.

Now approaching my sixth decade, one which many of my wonderful friends are telling me is the best ever, I am looking forward…to being present.  To appreciating moments.  To loving and being loved and nurturing that.  To riding out the storms that will surely come and to the great joys that will surely come too.  To sharing all these and our unpronounceable last name, with my unlikely Soul Mate.

Lisa Chadwick Tjaarda is a graduate of the University of South Carolina and worked most of her life in Health Care Reimbursement. Caregiving has become a full-time occupation and she now considers it her Master’s program in the University of Life on Earth. A lifelong writer, Blogging started as a therapeutic outlet but is becoming a way of reaching out to others who have stumbled into this journey. “Sharing thoughts about how growing older could be less about older and more about growing is becoming a passion for me”. Please follow and share her posts at: http://livingitupward.blogspot.com/ and on her Facebook page: https://www.facebook.com/livingitupward/ (Living Live)

1 thought on “Lisa Tjaarda – Love, School, and The Most Unlikely Soulmates”