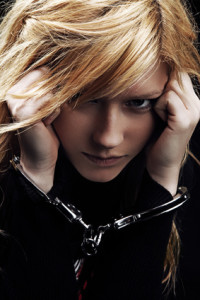 This quote  has me thinking again about forgiveness.

"Non-forgiveness turns you into a victim, because when you hold someone or something else responsible for your emotional state, you give away control of your feelings." ~Cynthia Occelli

Some of my biggest life lessons have been delivered in pretty wild ways, like my main lesson on forgiveness which came from a heated battle with god that lasted for hours.

There was a person in my life I hated at the moment and frankly had some pretty good reasons for feeling that way. The argument, for it can't truthfully be called anything else, started with me very generously offering to help god punish this person for their mean and hurtful behavior. I was so on board with this!

Instead, clear as I hear you speaking, god said, "Forgive him."

Um, I was pretty sure god had not heard me correctly. So I offered again.

This went on and on and on. I just kept arguing, adding points to how and why I was "right," trying different angles. Finally exhausted, I threw in the towel. With less enthusiasm than you might expect for a root canal, I gave in.

"OK, fine, if you insist. I forgive him. There, are you happy?" (There might have been just a teensy bit of sarcasm in my tone of voice.)

Literally in that instant, there was a shift and a HUGE ah-ha. My unforgiveness hadn't hurt that other person one bit. He didn't care at all whether I forgave him or not. I had only been hurting ME, victimizing ME, limiting ME.

I had been a hostage of my own making. I had been insisting that this person make amends and felt very righteously that he should get punished for good measure. All so I could go back to feeling happy and peaceful. I was squandering my life trying to control someone else.

In that moment, the process of forgiveness began in me. Before long, I didn't care what happened to this person. My own feelings had become neutral because Karma would take care of him - he had his own lessons to learn, after all - and I didn't need to fret about it one little bit.

Forgiving him was a gift to myself and that's the part most of us miss. I really wanted this person and the burden associated with what he had done out of my life, but I was the one keeping the connection alive by withholding my forgiveness.

Forgiveness is the only way to set yourself free. More about forgiveness HERE 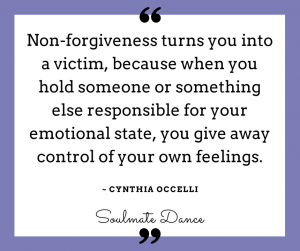 2 thoughts on “Shackled by Unforgiveness”