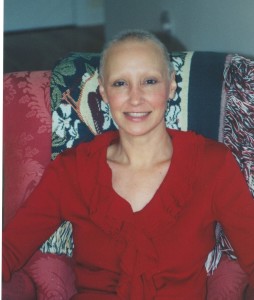 Life changes forever the moment you hear the word "cancer" used in a sentence with your own name.

What an understatement! If you choose a conventional route of chemo and radiation as I did back in 2002 when it was my name in that sentence, the days become a whirlwind of doctors' appointments, surgery, chemo, and radiation. Personally, I would make different choices today, but that’s a different post for another day.

So instead, let’s talk about hair. First, you have to picture me, the ultimate un-hair gal. At the time, I was a fairly youthful looking 40-something with long straight dark hair just a little salty with silver. Good old wash and wear hair. Throw it into a ponytail hair. These are very important hair attributes for me. (Yes, I tried Big Hair in the 80s. Big Frosted Hair. There is photo evidence. We all have youthful indiscretions.)

So it came as a complete shock that the words “…and all your hair will probably fall out” were the ones that caused me to come unglued. Not surgery, not chemo, not radiation…hair loss. Suddenly, my whole identity was wrapped up in the hair I was about to lose. Turns out that “un-hair” was actually a statement about who I was and I was about to not be me in that way any more.

Not being brave enough at that time to flaunt a bald head or wear scarves, I made a bee-line for the wig shop. Maybe this was my chance to be a bombshell blonde or a flaming redhead, to assume a new identity or maybe more than one.  Naw. That was fun in the shop, but the wig that came home with me was a cute bob like Catherine Zeta Jones sported in “Chicago.”  The deciding factor was the huge thumbs up from the twinkle-eyed octogenarian gentleman who whistled and cat-called “Sexy!!!”

Sure enough, shortly after the first chemo treatment, all my hair fell out and I was wearing that wig. Then, a funny thing happened – strangers started asking who did my hair.  People on the street.  A nice lady at a party. After the third or fourth incident, I wrote in my journal “Dear god, if you wanted me to change my hairdo, you could have just said so!”

Slowly, I began wondering what else might have needed changing that I had been missing and a turning point blossomed. Cancer became an opportunity to clean house, get rid of whatever really needed to be gone, and to define my next chapter. I jettisoned things I could no longer do or that didn’t work or that I just didn’t like. And as I threw the old stuff overboard, space was cleared for the soul changes – career, habits, family, friends, and even finding my beloved – that my heart had been craving.

Fast forward to today. There is long hair attached to my head again, but almost everything else is different. The hair is thinner, frizzier, and greyer, but it's mine. I re-vamped my career, moved (more than once), and got married.  Turns out that soul purging was an essential step in my soul journey.

First, there was resistance and jumping from this to that. Gradually, there was awakening and recognition, then baby steps, then leaps, and finally the new/old/original me began to emerge and there was peace.

Kris Carr of Crazy Sexy Cancer is quoted as saying, “I would never call cancer a gift because I wouldn’t give it to you.” Very true. And yet it is precisely when we can see the gift in each and every thing that comes our way that our true healing occurs. And it is through our healing that we recognize and welcome our true selves.