It’s that time of year again. The internet is full of people making resolutions, posting their Word of the Year, and committing to saying YES more often. Me? I’ve decided to go in the opposite direction and declare January the launch of my YES Diet.

A while back, I heard the term YES Diet used, though where is lost in the ethers. The phrase stuck with me, though, because saying yes to too much had been a soul-sucking habit for so much of my life.

It started in childhood. My need to fit in, to be accepted, drove me to say YES to pretty much anything anyone asked. If I said YES, they would like me, right? It got even worse as a young mother living in a town where I always felt like an odd duck. Saying yes would help me fit in and pave the way for my children, right?

I love saying YES! I love trying new things, meeting new people, sampling new foods and wines, exploring (new to me) places, learning new business skills. It’s part of the fabric of my being and I like that about myself. So when my ex-husband blew up about my YES habit, I was smugly sure it was his problem, not mine.

Only deep down, I knew saying YES had gotten out of control and that my curiosity and sense of adventure were not the real culprits. Too often I would catch myself saying YES when my inner voice was silently shouting NO, NO, NO!! Instead of being the gateway to wonderful new experiences, saying YES had become a prison of my own making.

Where did my personal compulsion to say YES come from?

I was one of those kids who always felt like an outsider. Possibly because of that, I had two powerful and conflicting drives: 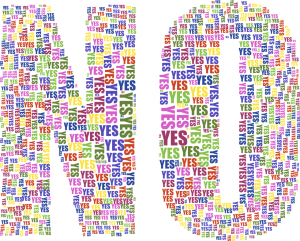 Those forces led to years of feeling exhausted and stretched thin to the point of snapping.

Why do we say YES to too many things?

There are a few fundamental, and possibly universal, mental hurdles to leap when learning to say NO:

Saying YES indiscriminately to anything anyone asks and to whatever comes along leads to a life that is stressful, out of balance, and driven by the wants and needs of others. It’s based on ignoring yourself.

Saying YES to everything fills your schedule, creates frantic busy-ness, and corners you into saying NO to the opportunities and people that can bring you genuine joy and satisfaction. Instead of creating wings of discovery, saying YES too often creates a burden that weighs you down.

Learning to say YES only when you mean it helps you overcome fear of rejection. It puts you in charge of your own life. Instead of feeling trapped, resentful, guilty, overburdened, anxious, stressed, or just plain old crazy, you will feel strong, free, and calm.

So here’s the deal - Some diets focus on eliminating certain foods, but the best focus on rebalancing for health. And that’s exactly what I’m doing with the word YES – bringing it back into balance, using it only when healthy and appropriate, and surrounding it with choices that nurture my body, soul, and relationships.

Starting now, I’m going on a YES diet and getting cozy with Saying YES to Saying NO.