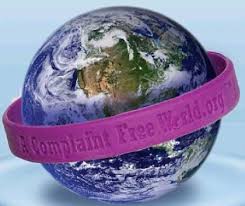 I stumbled upon A Complaint Free World shortly after its birth in 2006 and honestly can’t tell you how it came on my radar. Like many things in my life, it needed to be there and so it appeared.

In fact, the story of its birth has a similar genesis. In July 2006 Rev. Will Bowen was teaching a series on Prosperity to his congregation. A key concept was forming a true habit of gratitude by going 21-days without complaining. Bowen based that on studies showing it takes 21 days to form any new habit. In an effort to make the lesson practical (and help it stick), the church purchased purple bracelets and gave them away encouraging participants to move the bracelet to the other arm if they caught themselves complaining. Simple enough, right? Well, not as simple as it sounds and we’ll get to that in a moment, but first a few pointers:

How do I use the purple bracelet to become a Complaint Free person?

It generally takes 21 days of repeated behavior to form a new habit, and complaining is habitual for most of us. For most of us, it is much easier to replace one habit with another than it is to make ourselves stop a habit we no longer want. In fact, just trying to stop it often makes it loom larger. Not the desired effect!

The purple bracelet is a simple yet powerful tool to help you become more aware of how well you are creating your life and make more self-nurturing choices. Here are the suggested rules:

1. Begin to wear the bracelet on either wrist
2. When you catch yourself complaining, gossiping or criticizing (it’s ok, everyone does) move the bracelet to the other arm and begin again.
3. If you hear someone else who is wearing a bracelet complain, you may point out their need to switch the bracelet to the other arm; BUT if you’re going to do this, you must move your bracelet first!
4. Stay with it. It may take many months but when you reach 21 days you will find that your entire life is happier, more loving and more enjoyable.

How do I know if I’m complaining?

Complaining is a sneaky thief! To "Complain" is defined as "to express pain, grief, or discontent." What comes under that umbrella? Fault-finding, blaming, criticizing, telling people how they “should” do something, whining, self-pity, boredom – this list is LONG! Surely, it makes sense to express pain, grief, or discontent occasionally, but most people do so constantly and unconsciously. In so doing, they are talking and thinking about what they do not want in their life and, thereby, attracting more pain, grief, and discontent. Instead, think and talk about what you are grateful for. Talk about what you DO want and not what you DON'T want.

How often does the average person complain?

How long will it take for me to become complaint free?

The average person who really gives this their best effort usually takes 4-10 months to go 21 consecutive days without complaining. It is not easy as it sounds, but it’s worth it!

If I think a complaint, but don’t speak it, do I have to move my bracelet?

No, though something interesting is likely to happen. The more you stop articulating your complaints the less complaining thoughts you have. Through this process you will reformat your mental hard drive and become a happier person in general.

I’m just one person. Can one person effect positive change by giving up complaining?

Complaining spreads negative energy and negative energy cannot create a positive outcome. Just by being more grateful and positive yourself, you will call attention in others to their own habits and mindset.

Martin Luther King, Jr. didn’t stand before thousands in Washington, DC and shout, “Isn’t it awful how we’re being treated?” No. He shared his dream of a day when all children of all races would play and live together in peace and harmony. His vision galvanized our country and created positive change. For you to affect change, paint a bright vivid picture of the problem already solved and share this with as many people as you can.

On the contrary. Studies have shown that complaining about one’s health, for example, tends to make a person’s health worse.

How can I get someone else to stop complaining?

That’s not your job. In fact, aren’t you just complaining about their complaining? On the other hand, you can follow the words of Ben Franklin, “The best sermon is a good example.” As you focus on transforming your own life by not complaining, you will become an example of the benefits of positive living which will inspire those around you. Moreover, because you’re no longer participating in the griping, others will be far less likely to gripe to you.

Where does the money go?

To pay for the purchasing, packaging, and shipping of purple bracelets. “A Complaint Free World, Inc.” is a non-profit entity which provides purple bracelets plus other materials and programs to help people affect positive change in their lives and which support the organization’s vision of creating a world of positive cooperation.

We envision a positive shift in our world's consciousness.

We see a day when people focus on and speak about what they desire things to be rather than complaining about how things are.

We will provide Complaint Free purple bracelets and inspiration such that 60 million people (1% of the world's population) leave the toxic communication of complaining behind and experience an internal shift toward being more positive, hopeful and optimistic.
Every day, people interact with dozens if not hundreds of others. Our helping shift the attitudes of as little as 1% of humanity cannot help but have a ripple effect which will become a cascade of positivity around the world bringing about greater harmony, understanding, prosperity and peace.

Note: In July 2006, Will Bowen offered a simple idea for people to monitor their success at eradicating complaining from their lives. His idea exploded around the world and more than 10 million purple Complaint Free bracelets have been sent to people in over 106 countries.

How Can I Help?

1 thought on “A Complaint Free World”