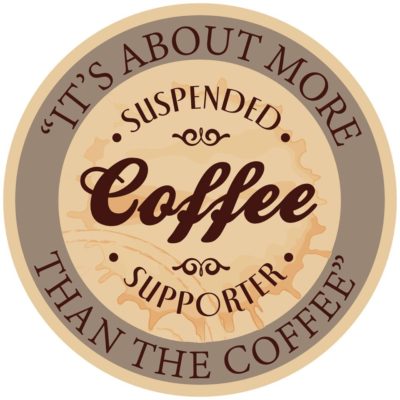 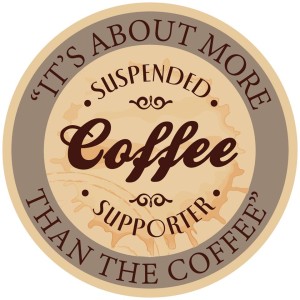 It’s one of the fastest growing movements worldwide and that should be no surprise. It’s such a simple idea, really, one we’ve all thought of countless times and maybe even practiced randomly, haphazardly. It started like this...

We entered a little coffeehouse with a friend of mine and gave our order. While we were approaching our table two people came in and went the counter. “Five coffees, please. Two of them for us and three suspended.” They paid for their order, took the two and left. I asked my friend: “What are those ‘suspended coffees?’” “Wait for it and you will see,” he answered. Some more people entered. The next order was for seven coffees and it was made by three lawyers – three for them and four “suspended.” While I still wondered what’s the deal with those “suspended” coffees I enjoyed the summer weather and the beautiful view towards the square in front of the café. Suddenly a man dressed in shabby clothes who looked like a beggar came in through the door and kindly asked “Do you have a suspended coffee?” He got a coffee for free – no charge – he sat down and took a sip and a smile ran through his face.

It’s simple – people pay in advance for a coffee meant for someone who cannot afford a warm beverage. The tradition with the suspended coffees started in Naples, but it has spread all over the world and in some places you can order not only a suspended coffee, but also a sandwich or a whole meal.

After reading about the above story, John Sweeney created the Facebook page Suspended Coffees. Soon after that something amazing happened. People loved the page and the simple but amazing gesture of a suspended coffee. Over 260,000 people have joined the page since March 27, 2013.
The progress has been amazing and the amount of people who have given their time freely to raise awareness is unbelievable. Suspended Coffees need to help as many people as possible who may be down on their luck, having a bad day or who just need a friend to show them that there is good in the world. To see the effect this movement is having on people, please check out their Facebook page, have a read, and see inspiration and kindness just everywhere.

The Suspended Coffees team puts several hours of work into the movement everyday; emailing coffee shops and people asking them to support the movement. Currently there are more than 1,000 cafes on board as well as other businesses like restaurants, opticians, and bakeries.

What Is a Suspended Coffee?

When you buy a coffee, you pay for a second one. The barista gives you your coffee, then logs the second coffee as “suspended” (meaning that the transaction has been paused, or not yet completed – the money has been received, but the coffee has not yet been delivered).

When someone who can’t afford a coffee comes in, they can ask whether there are any “suspended” coffees. The barista checks the log and, if there are any pre-paid coffees, the person is given a free coffee. The transaction is then considered complete.

The tradition of suspended coffee dates back more than a century to Naples, though it declined in popularity after World War II. During the recent global economic crisis, the practice was revived and, in the age of social media, suspended coffee quickly became a global phenomenon.

Who is eligible to receive the free coffee/food? The premise is that anyone in need can seek this out. Each business will need to decide who they feel is in need. We don’t believe it is for us to judge who is in need and who is not. Ultimately, if someone is approaching you to ask for a suspended coffee, they are probably in need in some way.

When we say "in need," it’s not just someone who is homeless. It may be a single mother of 4 children who can’t afford coffee that month in the grocery shopping. She may just need a coffee to get her through the day and a break while her kids are all at school. You may have a man walk in, well-groomed and dressed in a business suit… you may not think from appearances that he is 'in need," but he may be on skid row and in his 16th week of job hunting. It can be for a student struggling with exams. It’s all about suspending your judgment and spreading a little kindness by paying it forward.

What Difference Can One Person Make?

“While wandering a deserted beach at dawn, stagnant in my work, I saw a man in the distance bending and throwing as he walked the endless stretch toward me. As he came near, I could see that he was throwing starfish, abandoned on the sand by the tide, back into the sea. When he was close enough I asked him why he was working so hard at this strange task. He said that the sun would dry the starfish and they would die. I said to him that I thought he was foolish. There were thousands of starfish on miles and miles of beach. One man alone could never make a difference. He smiled as he picked up the next starfish. Hurling it far into the sea he said, “It makes a difference for this one.” I abandoned my writing and spent the morning throwing starfish.”

(When you save starfish - and you really must - please don't throw them. Place them gently back in the water. Throwing can kill them, too. XO)

When You Can Act in Kindness, Do It

Every once in a while an idea comes along with the potential to truly make the world a better place. Suspended Coffee is one of those ideas.

First, it’s simple. You walk into a coffee shop and instead of buying just one cup of coffee, you buy two, or more. You buy one for yourself and one for someone in need.

Second, it’s direct. You do not need to worry if your money is going to actually help someone or just to take care of a charity organization and its overhead and expenses. You also do not need to worry whether or not your recipient will use your gift to buy alcohol or drugs. You can directly control which food or beverage you would like to donate.

Third, it’s win-win. You not only support a person in need, you also support your local business and all its employees. Your money does not go to another state, country or continent. It stays right in the neighborhood where it was spent.

Lastly, it can be used for more than just coffee. You could buy a hot bowl of nourishing soup, a filling sandwich, water, fruit, bread, or a full meal. Suspended coffee’s simplicity makes it easy to duplicate with other food items.

Please support the movement to raise awareness about Suspended Coffees.

How You Can Help

“It’s about More Than the Coffee”