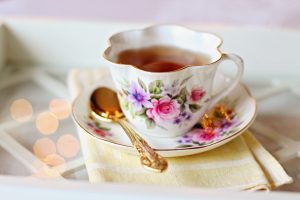 If you’ve never heard of CCF Tea, let me make the introduction. CCF Tea is brewed from a three-seed blend that promotes healthy digestion and helps heal your gut. The soothing blend acts as a mild diuretic and helps reduce bloating and inflammation. As a bonus, helping with these issues can also promote weight lost and maintaining a healthy weight.

CCF Tea, along with our Morning Mocha version of bulletproof coffee, is a part of our daily routine.

CCF is an acronym for the ingredients – coriander, cumin, and fennel. Like many herbal teas, the taste is a little earthy. For our personal version, we add ginger, manjistha, and fenugreek which improves the flavor and adds additional benefits.

Digestive issues run in my family and have plagued me much of my life. In my case, the root cause has not been found despite years of testing. CCF tea and other more natural approaches have helped manage the symptoms far better than any drug.

Here’s why these ingredients work:

Cumin - Cumin is a mainstay in Ayurvedic medicine and has a long history of use for improving digestion, helping balance blood sugar, and addressing respiratory issues. It is a decent source of iron and manganese, and one variety is the source of black cumin seed oil, itself used for gut healing and fighting superbugs like MRSA.

Coriander – Coriander has a long and multi-cultural history as a digestive aid and remedy, and is also considered a relaxing spice that can help calm an anxious mind or gut. It is often used in tinctures and other remedies for respiratory problems, urinary issues, and nervous system disorders. Some people also claim skin benefits from using coriander.

Fennel – Fennel is another multicultural favorite with a long history of use in Chinese, Indian, Egyptian, Roman, and Greek cultures. It is used as a remedy for bloating and gas, and as an expectorant to sooth respiratory issues. Fennel is frequently recommended for nursing mothers to improve milk supply and because of its soothing properties can help calm a colicky baby.

These three are the basic ingredients for CCF tea, but we add three more. Our variation comes from The Prime by Dr. Kulreet Chaudhary.

Manjistha - Manjistha is a potent antioxidant, anti-inflammatory and anti-microbial. It relives digestive troubles, and has also been used to relax muscles, heal bruises, reduce arthritic swelling and pain, and ease stress, anxiety and depression.

Fenugreek – Fenugreek is another digestive powerhouse that can also improve cholesterol levels. It reduces inflammation and can improve exercise performance.

Some folks add honey. We tried it and decided to use organic candied ginger instead to add a bit of sweet to all the earthiness and spice. Other optional add-ins include cinnamon, lime, and lemon.

I make 32 oz. for each of us which we sip throughout the day. We use a Yeti-clone mug and a tea infuser. You can also simmer the spice blend in a saucepan, then strain before serving.

Five minutes of steeping are needed, but I leave the infuser in the mug and let the flavor continue to ripen over the course of the day.

Mix well and store in an air-tight container. I use a mason jar and shake it before each use because the powder will settle.

For each serving, place ½ inch fresh ginger, peeled, OR small piece of candied ginger in each mug or the saucepan. Use about 1 teaspoon of spice mix for each 32 oz. cup.

If using an infuser, put the spice blend in the infuser, then place the filled infuser and the ginger in the mug. Heat the water in a kettle or saucepan, then pour over.

If using a saucepan, add the spice blend and ginger to 32 oz of cold water. bring almost to a boil, steep for 5 minutes, then strain into mugs.