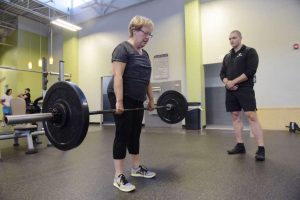 Marilyn Cataldo didn't set out to break the powerlifting record.

Marilyn is a retired secretary who began going to the gym to relieve stress when her husband was diagnosed with bone cancer probably due to exposure to Agent Orange. She found herself doing battle with the VA and pushing for coverage while her husband was going through chemo and stem cell transplants.

Working out kept her fit physically and mentally. It gave her a routine every day and introduced her to a new group of friends about the same age who encouraged each other. Marilyn enjoyed the bike and the treadmill, and eventually worked with free weights..

Before passing away in 2016, her husband made her promise she would continue taking care of herself and working out.

Then, she tried her hand at powerlifting...

Click HERE to read what happened.
You're not too old and it's never too late.