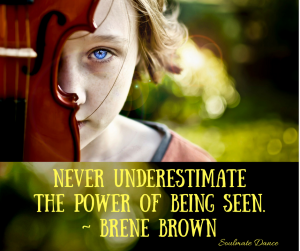 In Braving the Wilderness, Brené Brown speaks candidly and transparently about using self-destructive behaviors to soothe the lack of belonging she so keenly felt. She quotes Anne Lamott to describe how weary that running away was leaving her - "By the end, I was deteriorating faster than I could lower my standards."
And then she met someone who saw her, the real her behind and beneath all her coping and soothing. Someone who saw her exactly as she was in the world and exactly as she was in her soul. And liked her.
They talked. They cracked open. (Her words and perfectly descriptive.)
"Never underestimate the power of being seen - it's exhausting to keep working against yourself when someone truly see and loves you....I was filled with grief and longing. Grief for the girl who never belonged anywhere and a longing to figure out who I was, what I liked, what I beloved in, and where I wanted to go."
In my own life, I've used workaholism, attempting to be the life of the party (I'm an INFP, emphasis on the I), quitting friendships before they could quit me, studying people instead of going within to know myself, and all sorts of other self-medications.
In other words, I hid - from myself and from others. I kept people including myself at arm's length.
All that did was increase my "knowing" that I did not belong.
And then, one day, someone saw me. The real ME, warts and all, and loved me anyway. And once that happened, others began to show up who could also see and love me. I began to look at myself differently. I allowed myself to see what had always been there within.
How are you self-soothing self-medicating, self-destructing?
Where are you hiding?
Order your copy of Braving the Wilderness HERE