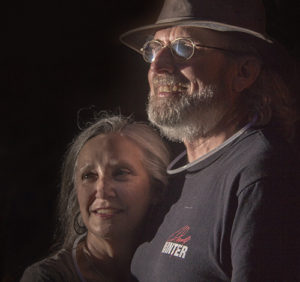 Steve and I are often asked how we finally found each other. The short answer is simple: we stopped looking.

How many times over the years did folks offer that frustrating well-intentioned advice?

Of course, that's exactly what I thought I'd been doing. Not looking. Just being. Clearly, something was missing.

Like many of my Single Sisters of a Certain Age, the soulmate scene wasn’t looking good. Maybe it was time to curl up under a blanket with the Lifetime Channel and call it a Life.  Except I don’t like TV. And I really didn’t believe there were no good men out there. Other women sometimes found their soulmate. And if one can do it, anyone can do it, right?  And then there was my own childhood soulmate prophecy to keep me going.

So I dated, Nice Guys and Bad Boys, yet what always started out with hope and giddy anticipation always ended disastrously. Why were they never the great guys they seemed to be on those first dates?  Why did they all turn out to be the same needy, bossy, unavailable, unreliable babies?  What if the only ones left were the ones someone else had thrown back? It was a vicious cycle.

At the same time, unbeknownst to me, Steve was having a similar epiphany. He had been less than impressed with the women he was meeting in the course of his routine days. Sure, some of them were nice enough, but none of them were Soulmate Contenders. So he began to look at his routine days and the kinds of people who crossed his path. What if the problem was – gasp again! - his path? What if he needed a new path?

Though we didn’t yet know it, we were both taking baby steps toward what has become our shared philosophy. Instead of looking around for our soulmate and fussing about what was “out there,” we began focusing on becoming the mate the other half of our soul was looking to find. Though related, this is fundamentally different from simply becoming your own best self, an idea I suspect we will be exploring for a long time, maybe a lifetime.

The bottom line in this story is all good news – There’s nothing wrong with you and all the good ones are not taken. It is truly possible to find The One and have fun doing it. And once they have been found, have a boatload of fun living The Soulmate Life, skipping the light fandango together.

The steps to begin your own shift are deceptively simple:

Most people do Step 1. A few do Step 2. Even fewer do Step 3. So you know what happens to Step 4. The idea is to start getting inside the mindset of this person you want in your life. What are THEY looking for?  How can YOU offer more of what they are looking for? Is WHO you are in alignment with what you want? Do you change  (grow) yourself or change (grow) your criteria?

While Steve and I both stopped looking, we didn’t stop. We just stopped doing the same old stuff hoping to find something new. And now we’re trying to put whatever it was we did and are doing into words.  Because so many of you have asked.  And maybe we can have done some of this for you.

8 thoughts on “How Did You Find Your Soulmate?”