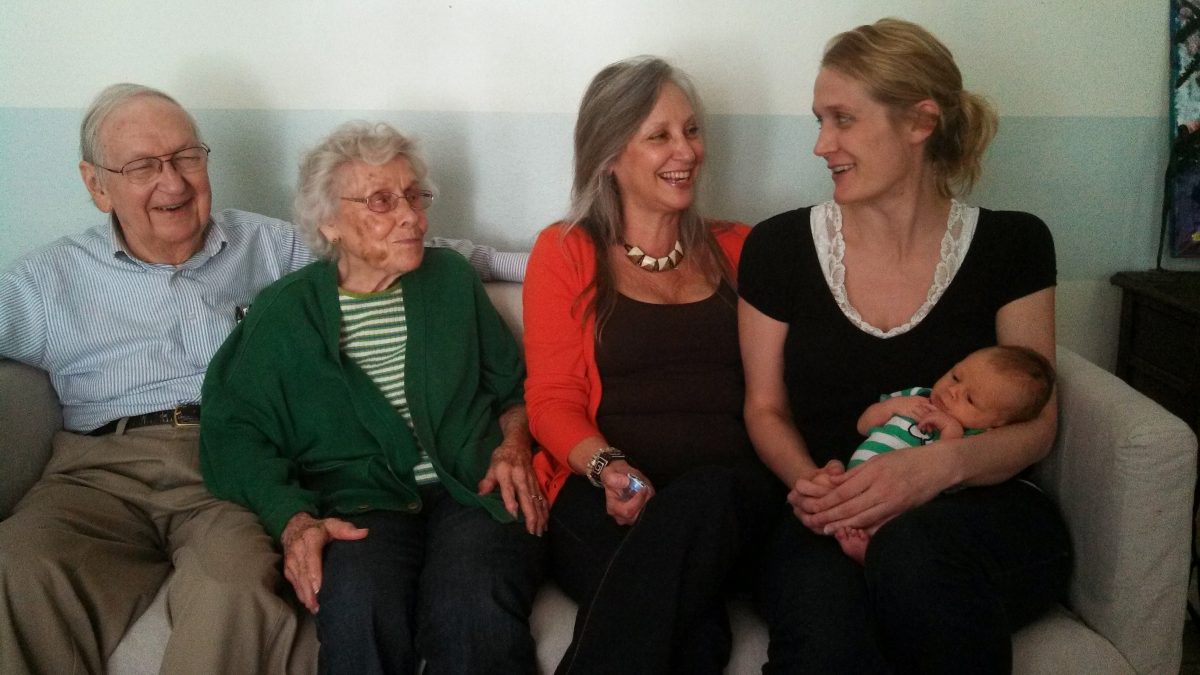 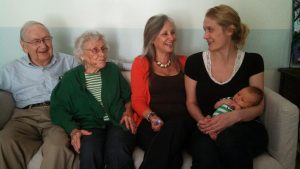 Four generations of my family - Dad, Mom, me, my daughter, and her first baby

It was September of 2011, and I was planning what was intended to be a quick weekend visit to my parents. A few days before my scheduled arrival, Mom called and asked how long I planned to stay. Assuming she mean a long weekend instead of the Friday evening to Sunday morning planned, I asked what she had in mind.

“They’re saying I have Alzheimer’s and I have a few things I want to get done while I’m still lucid. How long can you stay?”

That’s how my sister, brother, and I found out about her diagnosis, and how I ended up packing my clothes, laptop, and cat into my car and moving back into my childhood bedroom to try to sort things out. Of course, Mom didn’t remember that conversation, and was alternately angry and grateful to have me home.

The situation was grave: She and dad were subsisting mainly on chips, cookies, and other snack foods. She was prone to starting fires in the microwave by programming 10 or 20 minutes instead of 1 or 2. She was wandering the house in the night, climbing up a rickety stepladder to stand on the counters searching for long-lost items she was certain were in the highest cupboards. And she was just as stubborn as ever. (Her dad had nicknamed her “Jenny” when she was just a little thing, saying she was more stubborn than his Jenny mule.)

Dad was cranky and completely unhelpful because she wasn’t taking care of him the way he thought she should.

It felt like The Assault of the Tall Toddlers.

And just in case sudden caregiving wasn’t enough, two weeks after committing to my family that I would be the primary caregiver, I met my darling Steve, adding new love and eventually new marriage, new house, and new town, to the mix.

Over the four years of caregiving, there were weddings, births, illnesses, and deaths.

It’s been a weird and wonderful ride.

Welcome to the Sandwich Generation

The term “Sandwich Generation” was coined by Carol Abaya in 2006 to describe people who are feeling the squeeze between aging parents, children, and grandchildren. We are caught in the middle and often feel smushed or drawn and quartered.

The term may be new, but prior to the 20th century, multigenerational families and responsibilities were the norm. During the last hundred years, that previously common living style nearly died out as society became more mobile. Today, it is roaring back out of both necessity and preference. People are living longer, creating a statistically large population of older adults requiring some level of help.

For the Sandwich Generation woman, the constant multitasking can be exhausting. Our family ultimately decided to move Mom and Dad to an assisted living community, but I retained responsibility for monitoring their care and providing transportation for doctor appointments and shopping.  Most weeks, that meant 2 – 3 trips to their retirement community 20 miles away plus whatever appointments or errands they needed.

Stress, depression, and burnout are part of this phase of life.

And then there’s the financial burden.

“People in their 40s, 50s, and 60s have a trio of obligations to worry about – college for their kids, retirement savings for themselves, and caring for an older parent,” says Jean Chatzky, financial advisor and author of Age Proof.  “You can borrow for college if you have to. You can kick retirement savings down the road a few years if you must.  But when it comes to aging parents, you often can’t put it off, and you can’t exactly say no.” And we don’t. Nearly 30% of Americans with a parent age 65 or older help Mom or Dad out financially according to the Pew Research Center.

Becoming a caregiver for elderly parents does not come with a manual, and there are few good ways to prepare for the inherent challenges. Perhaps the greatest challenge is rethinking your own identity and role within the family dynamic.

I had defined myself as a business owner and single mom, loving these roles and wrapping my identity around them with pleasure and fulfillment. I was perking along with my own plans completely unprepared for what was about to come.

My fiercely independent mother had always made it clear that she would not be wanting help or interference as she grew older, so none of us were prepared for the magnitude of her need when Alzheimer’s came crashing in. On top of that, my own relationship with her had been challenging at best, even though she gets full credit for my sense of adventure and my love of art, music, cooking, fashion, and travel. How could I become a loving caregiver when most days I still felt wounded?

Taking on elder care (especially if you still have children at home) while maintaining your place in your own life is equal parts challenging and gratifying, requiring massive amounts of fortitude and patience. At best, it’s a delicate balancing act. At worst, it’s balancing everyone’s needs except your own.

Sandra Loh, author of The Madwoman in the Volvo: My Year of Raging Hormones, talks about the triple-Ms, or “middle aged mothers in menopause.” It’s that time when biologically women begin losing their nurturing hormones and no longer want to take care of people, yet are called upon to care for aging parents and sometimes grandchildren in addition to any children still at home. It becomes physically exhausting and mentally challenging to maintain the balancing act, and stress is one of the byproducts.

Still, having both children and aging parents in your home can strengthen bonds between the generations as evidenced by experiments bringing preschoolers into nursing homes. At Providence Mount St. Vincent in Seattle, WA, a community with over 400 elderly residents, a preschool housed within the retirement home is changing the lives of seniors and toddlers alike.

Plus, quite a few people report feeling a greater sense of self-worth and accomplishment when providing for their loved ones.

Writer Michelle Seitzer offers some much-needed humor in her suggestion that peeking inside the refrigerator of any mid-life or baby boomer household says it all: Ensure for the seniors, juice boxes for the grands, and a bottle of wine.  She also offers survival tips.

I first read these tips in the throes of caregiving, and grumbled that they must have been written by someone who wasn’t there. Now from the other side, I recognize their truth and realize my finest and happiest moments came when these were incorporated even if I wasn’t doing them consciously.

For me personally, self-care and pampering included massages and pedicures or anything with gentle healing touch. Nia and yoga became lifelines, the women in the Nia class becoming my tribe in our new town. It also included silent alone time when possible and lots of beach books instead of my usual deeper reading. And the greatest part of grace was accepting that some days surviving simply meant no one got hurt.