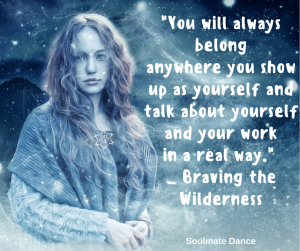 Most of my career was spent in a world dominated by men, tough men, primarily engineering types.

I'm a smallish woman who danced ballet, played the piano, read everything, and loved all things arts.

We were all strangers together in this land.

I didn't set out with a goal in mind of becoming a consultant to major industry, but opportunity and need kept meeting in that arena.

I thought I had to be tough there, one of the guys. I thought they'd eat me alive if I showed up as just me.

Fortunately, I come from a family of engineers. Those who aren't tend towards an engineering thinking style. My running joke (and standard approach in client meetings) was that I spoke English and engineering. They needed someone who could speak both (Me!!!) to develop effective training for them. It always worked.

For me, it also triggered constant feelings of needing to prove myself, of hiding behind a persona, of jokingly pretending to be someone I really was not.

In that world, I literally dressed differently and talked differently - put on a costume before showing up every day - to play this "role." It was a fascinating environment. I enjoyed hanging out with the guys and also knew I wasn't ever letting them see the real me.

Even though my company was good at what it did, I suffered from a huge sense of not belonging in that world.

Fear had a stranglehold on me. I wasn't showing up as my true self and deep down I knew it and knew they sensed it.

In Chapter One of Braving the Wilderness, Brene Brown describes exactly what it felt like:

"I'm doing that thing I do when I'm afraid. I'm floating above my life, watching it and studying it, rather than living it."

Of course, she wasn't around to describe it for me back then. Instead, this conversation happened with someone on my staff after a  meeting with a prospective client:

Paul:  Where are you?

Paul: You seem jittery today. You were talking 90 miles a minute. It was like you were buzzing around up in the air somewhere, off in the clouds. Did you see their faces? I'm pretty sure we'll get the contract, but you need to knock it off.  Relax! Just be yourself.

This guy was not Mr. Sensitive and certainly wasn't one to talk about feelings, but there he was telling me to just be myself.

His comments wouldn't leave me. They woke me in the middle of the night saying "pay attention"!!!!

So I did, and that led to soul-searching, and a decision to be more real, to show up as myself.

We began losing out on some contracts. Instead, opportunities began coming for a new type of work with non-profits and women entrepreneurs. The same skills were needed, but this work LOVED me showing as just me, wearing my preferred fashions and talking my own language!

And I belonged there. It felt like a homecoming in my career.

"You will always belong anywhere you show up as yourself and talk about yourself and your work in a real way." ~ Brene Brown

Get your copy of Braving the Wilderness HERE