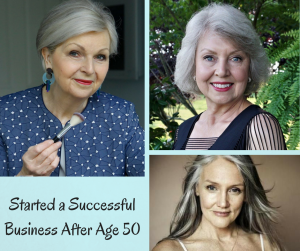 A few months ago while in a marketing class with mainly MUCH younger people, I mentioned working primarily with women over 40. One 20-something guy turned to me with deeply concerned eyes and said with all sincerity, " Oh, my grandma and her friends are in that group. They need so much help!  They are all so poor and sad and sick and lonely. It must be terrible to get so old that life is passing you by."

That may be true for his grandma and her friends. I hope not. I hope he is just suffering from myopic misperception, though it's a pretty common perspective.

Believing that all older women are poor and downtrodden is such a common myth that marketers tend  to misunderstand the majority of us entirely, serving up ads for adult diapers and ignoring us otherwise.

Statistically, that perception is far from true. The purchasing power of Boomer women is a powerhouse marketers can no longer afford to ignore. Statistics don't lie.

According to a She-Conomy article on Boomer Women and Affluence, "One huge, affluent segment wields more spending clout than any other: Baby-Boomer women. Born between 1946 and 1964, these women represent a portion of the buying public no marketer can afford to ignore. With successful careers, investments made during the “boom” years, and inheritances from parents or husbands, they are more financially empowered than any previous generation of women."

The article goes on to state, " The Baby Boomer Generation has more money, leisure time, and technology than any other generation in history. They can not only stay in touch with family and friends, but actually continue to pursue their careers while traveling. Thanks to Wi-Fi, satellite Internet hookups, e-mail and cell phones, baby boomers can continue running businesses from RV’s from just about anywhere in the United States."

Get the rest of the story and the facts HERE.