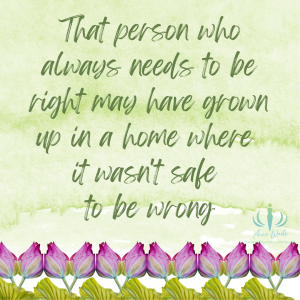 That person who always needs to be right may have grown up in a home where it wasn’t safe to be wrong.

Being right may have been born as a defense mechanism to ward off the consequences of being wrong.

Being right may have nothing to do with being an arrogant know-it-all.

Needing to be right could be fear and insecurity in disguise.

How do I know? I was that kid.

Each of us kids was assigned a role to play in the family. Mine was scapegoat. Everything that wasn’t right was my fault. So I pursued being right in order to be safe.

It was awful. The pressure was unbearable. I felt crushed under the weight.

My mother had given up her life as a gifted artist to pursue her new goal of Upwardly Mobile Young Couple. She had a plan. She had a checklist. She went after her dream, not realizing it was never what she really wanted. (That’s another story for another day. There’s an important ah-ha in it for all of us.)

Because it wasn’t what she really wanted and because her plan was dependent on other people playing roles they had not wanted for themselves, she was always disappointed. That meant I was always at fault. Wrong.

It was a vicious cycle.

But because trying not to be wrong was a deeply ingrained, emotionally-wrought habit, I did it on autopilot. And hated the results it got and the way it made me feel.

Having children of my own was a huge catalyst for beginning to question many of my autopilot behaviors and reactions.

Parenting differently became my first step in making peace with my own past.

I couldn’t change anything that had already happened and didn’t want to pretend none of it hurt. It did hurt. I just wanted to stop hurting and reacting to that hurt on autopilot. And was becoming painfully aware of how continuing those patterns could hurt my own children

I became a detective in my own life.

How could I become found by my own true self who had felt buried under the weight of trying – and failing – to stay safe?

Turned out, making peace with my past didn’t mean anything was wrong with me. Healing didn’t mean I needed to be fixed.

Healing mean I was ready and willing to begin changing those old deeply-ingrained, emotionally wrought habits.

I’m still doing this work with myself and my clients. We are all works in progress, and I’ve fallen in love with the simple fact that we humans are malleable. Ever-growing and ever-changing.

Our past does NOT have to define our future.