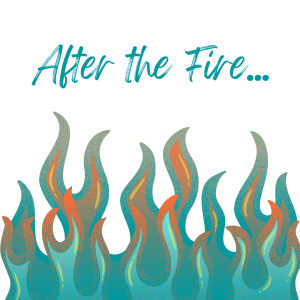 Two winters ago, an attractive house I pass nearly every day burned. All people and pets got out safely.

From the street, there seemed to be little damage. You had to look closely and deliberately to see the slight smokiness around the front door.

First, the furniture was carted out. Most was badly burned.

Next, the sheetrock was removed. What was left of it.

Clearly, the damage had been far worse than her public face had let on.

A few weeks later, trees and shrubbery were removed so workers could get to the back of the house.

And that’s when the real damage became apparent.

Nearly the whole back was burnt off. On one side, the bricks from the outer wall had tumbled.

She had been concealing the extent of her woundedness behind a brave facade.

Soon, all the damaged parts seemed removed and the rebuilding began. New framing began going up. New foundations were poured to change the footprint.

A week or so later, I saw that one end had collapsed. Part of the roof had fallen. It was the most heavily damaged side, but the workers had been shoring it up.

Despite moving forward with her new self, she still had more damage to deal with if her rebuild was to be strong and true.

Her story has me pondering on all of us.

When we feel damaged, our instinct is to present a brave face. To put on a mask. To prop ourselves up somehow.

We avoid feeling the feelings. We often put off healing as long as possible, especially if we think the healing itself might be painful.

Or we tell ourselves we’ve already taken care of all the damage. We’re so eager to move on.

And yet, if we don’t give ourselves the space and grace to heal and clear, we remain frozen in our damage. Paralyzed. Stuck in a place and state we don’t want. A brave face to the world, but dead inside.

Wishing and hoping that someone will look beyond the mask and see the real us still inside.

Coming out from behind the brave mask is scary at first, but then you realize it’s so much easier to breathe when you aren’t pretending everything is OK.

Consider the difference between being brave (strength, personal power, grace) and looking brave (masquerading, surrounded by a force field, prickly).

I have a feeling this house has been doing a bit of both. Maybe we all do.

A week or so later, I passed the house and noticed her as always.

The rest of her roof has been removed.

I caught myself wondering if she would survive the healing.

We put on that brave face. Then we hide behind it or maybe get trapped behind it.

Then at some point, we make the courageous decision to heal.

At first, it’s exciting and seems to go well. We’re clearing out the damage.

Then, without warning, we get thrust into the stage of “it gets worse before it gets better.”

We wonder if we can go on.

We wonder if it’s worth it.

We wonder if we can survive the healing and become whole again.

At that point, we have two choices:

There’s not a right answer. Or a wrong one, for that matter.

There’s only awareness and acceptance of what feels right for us at this moment.

It doesn’t matter if anyone else understands or agrees.

What we’re really doing is remembering our way home to our Self.

I’m happy to report that the house lives. Only about a third of her original structure could be salvaged, but to her it was worth saving. Once she had dealt with the damage, the rebuild has been swift and sure. She’s changed herself in some ways, and yet she is clearly, wholly, and truly herself.